We are blessed with numerous beaches close to Bude, all with their own individual character and we’re sure you will choose your own favourite.

The closest to The Beach Haven is Crooklets. It’s a mere ten minute stroll to walk here alough there is a large council-owned car park and a smaller private one. Cornwall Council have now relaxed restrictions to just July and August, between the hours of 10am and 6pm. (Don’t worry if you want to bring your dog in the summer as you only need to walk a couple of minutes further, in either direction, to find year-round dog-friendly beaches.) There are two good cafes, Rosie’s Kitchen and Crooklets Cafe. The beach is patrolled by lifeguards during the season and is also home to the UK’s first Surf Life Saving Club founded in 1953. There are toilets and also a ramp down to the beach for easier access for wheelchairs or pushchairs. 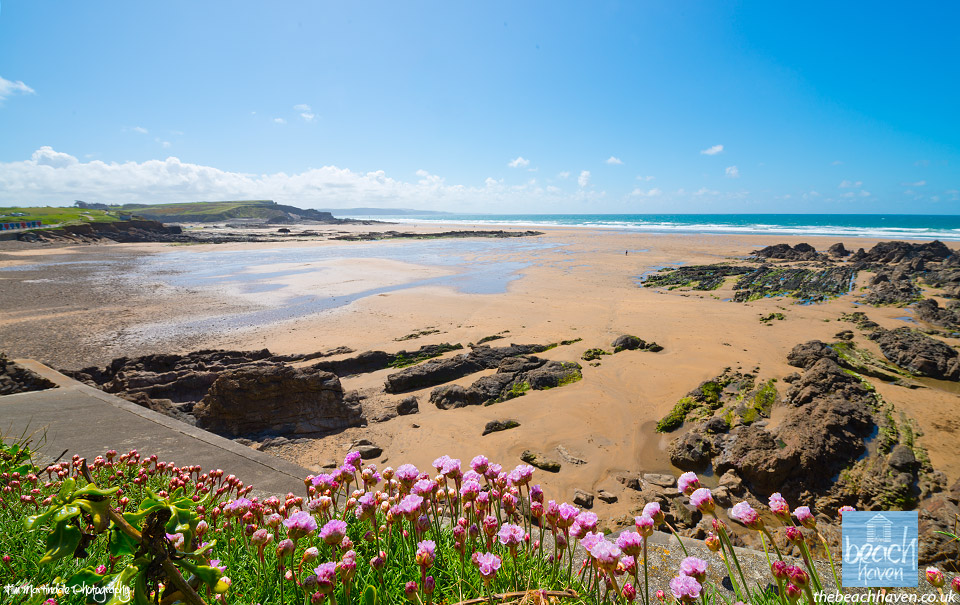 Crooklets Beach. Dog friendly all year apart from July and August 10am to 6pm.

Just to the north of Crooklets, around a small headland, Wrangle Point, is First Cove or Wrangle Beach as it’s often known. This is the closest year-round dog-friendly beach to The Beach Haven. It is reached down a small track leading to a rocky step onto the beach. At high tide there is very little beach exposed but it soon drops away and merges into Maer Low and Maer High Beaches. There are no facilities at all on these beaches. At low tide you can happily let your dog off the lead all the way to Duckpool; two and a half miles on the sand! 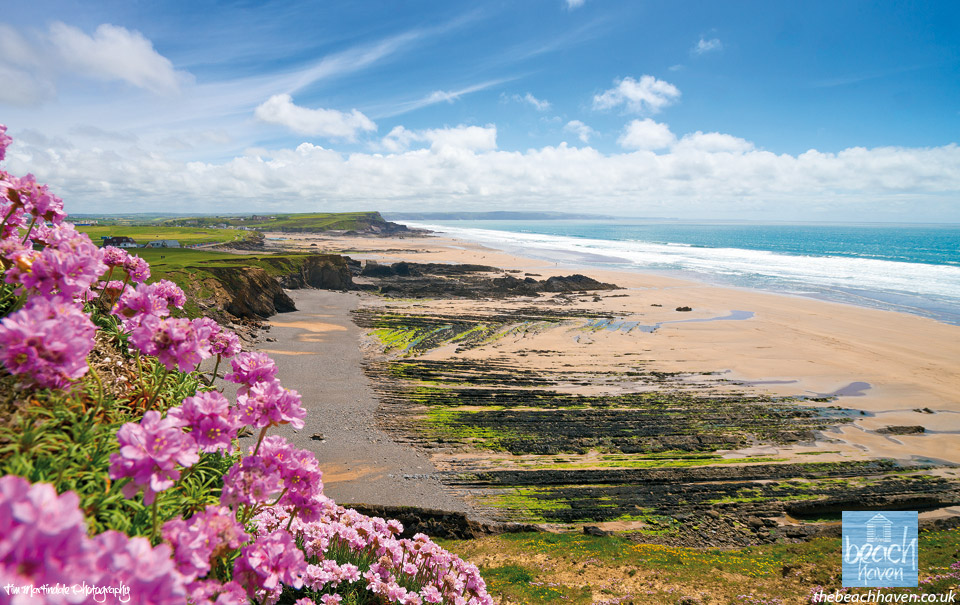 Northcott can be reached by a mile-long walk along the cliffs from Crooklets or via a narrow and sometimes bumpy and pot-holed lane that goes past Bude Holiday Park. It is dog friendly all year round and is lifeguard patrolled during the main season. The wonderful Rustic Tea Garden can be located just a short distance inland from the beach but there are no other facilities. 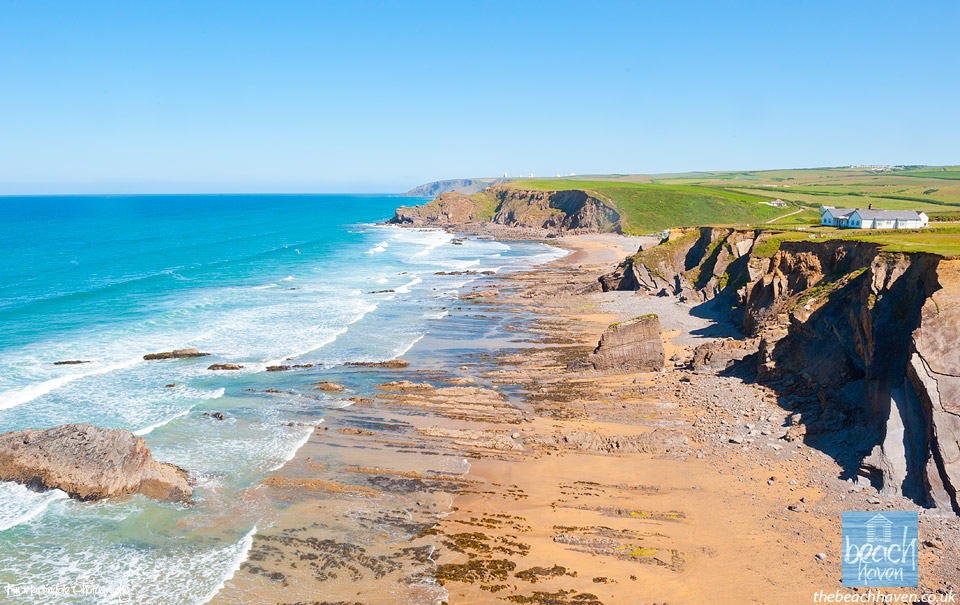 Sandymouth is reached either by a three mile walk along the cliffs or a five mile drive through the village of Poughill and the hamlet of Stibb. There is a National Trust car park, and cafe and the beach is lifeguard patrolled during the main season. Another year-round dog-friendly beach. 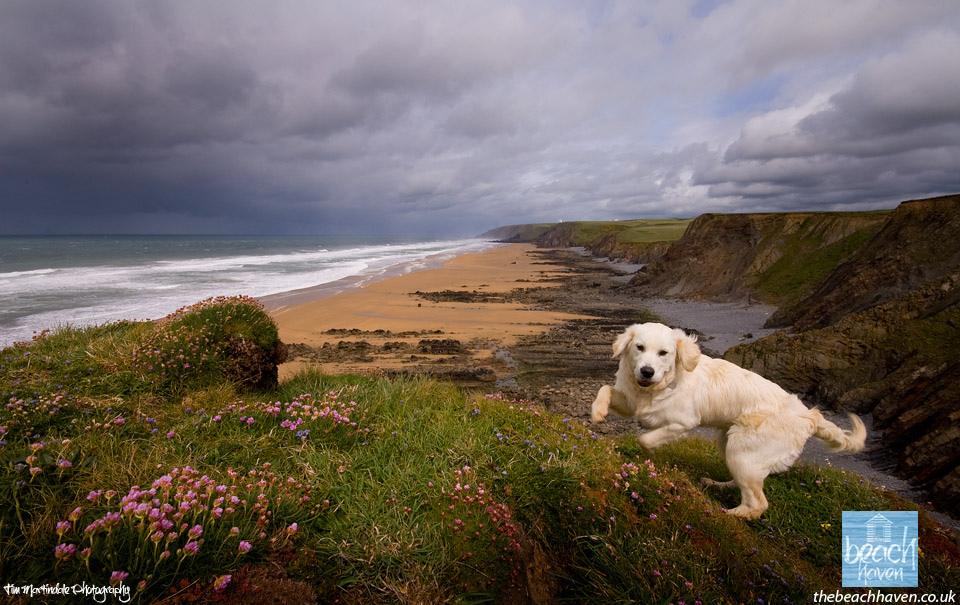 Duckpool lies at the end of a three mile stretch of sand (at a spring low tide) and can be reached by a four mile walk along the cliffs from The Beach Haven. Dog-friendly all year. Alternatively it is a five mile drive, just a short distance on from Sandymouth. There is an area for car parking by the beach but it can get full during the main season. There is a toilet block but no other facilities and the beach is not lifeguarded. Dogs are welcome all year round. 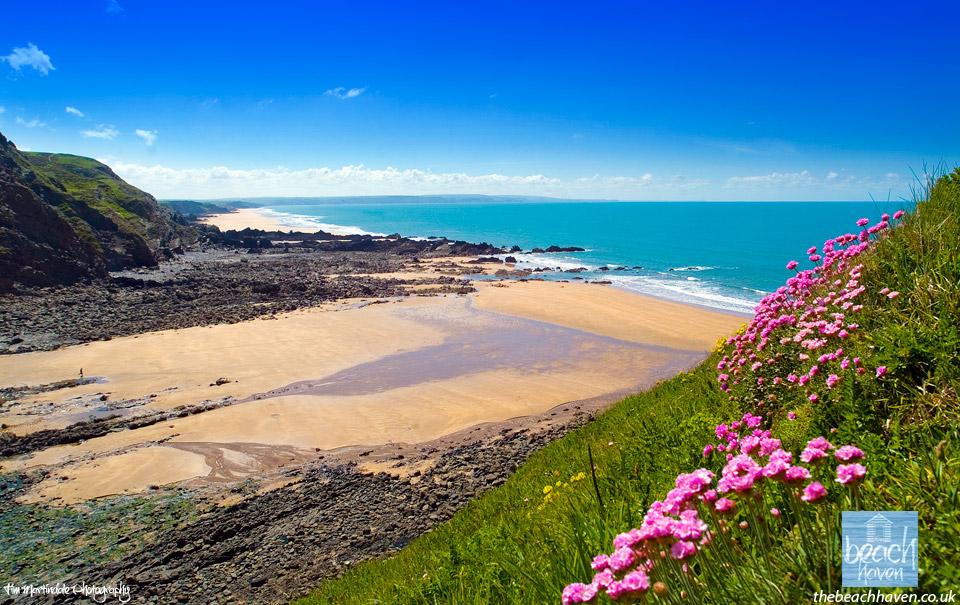 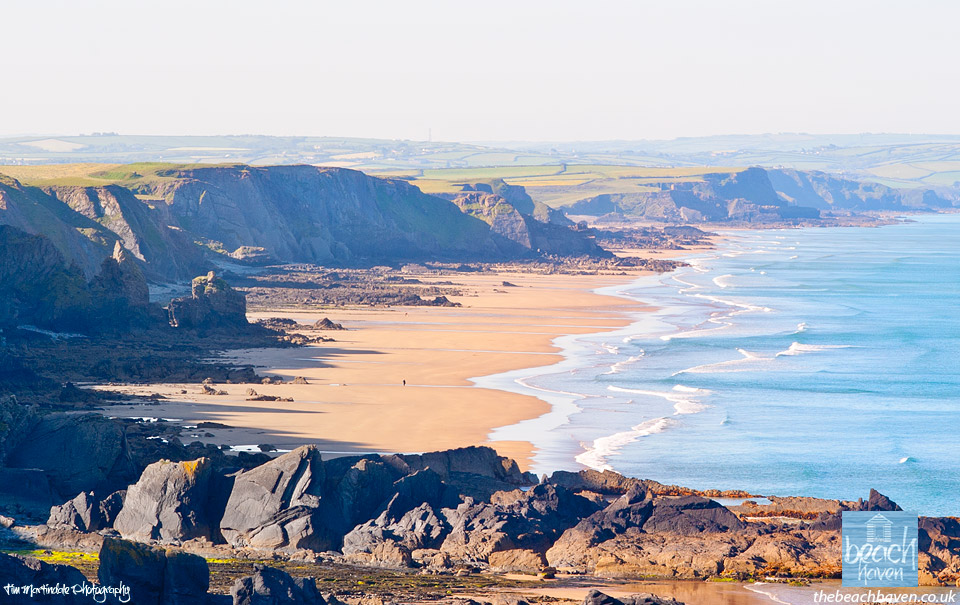 From Duckpool looking back to Bude. Three miles of sand at a spring low tide.

Bude’s main beach also features the open-air swimming pool. Dogs are permitted all year round but must be on a lead between 10am and 6pm from April to September. The beach is lifeguard patrolled throughout an extended season. There is a wonderful beach cafe, Life’s a Beach, which transforms into a classy bistro at night. There are toilets and a large council-operated car park but it can get full in the summer. 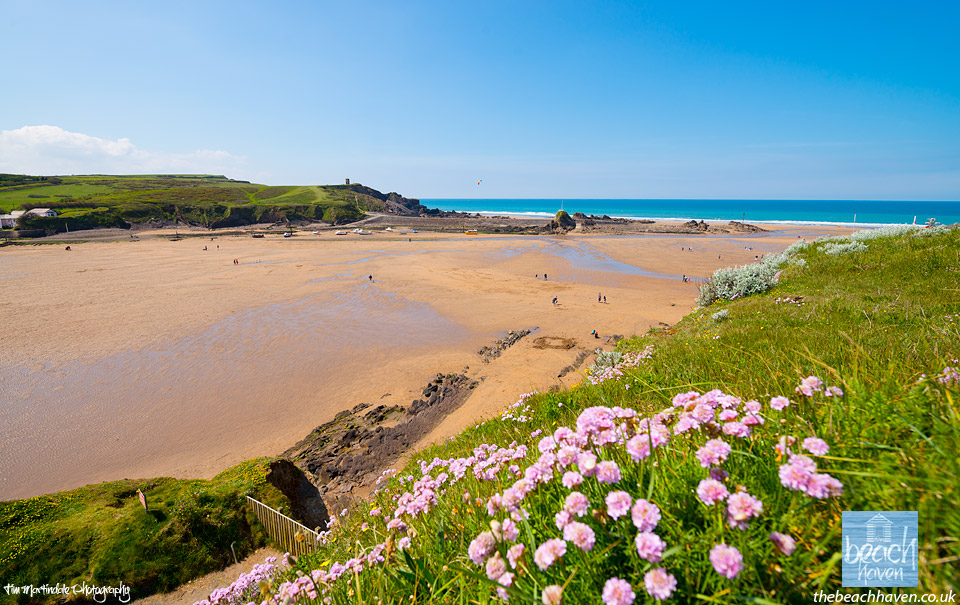 Summerleaze beach. Dogs are permitted all year round but must be on a lead in the main season. 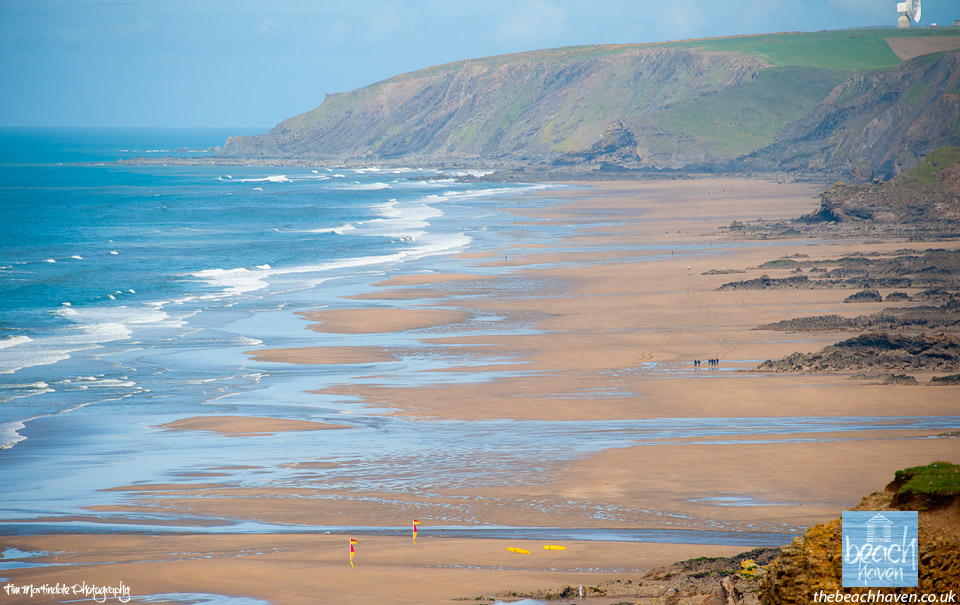 Summerleaze beach all the way up to Duckpool, three miles along the beach 🙂

Widemouth is a large beach divided in two, the northern end being known as the main Widemouth beach and the southern end called Black Rock. The main beach is a Blue Flag beach which means there is a dog-ban beach between April and the end of September but dogs are welcome the rest of  the year. There is a large council operated car park and the beach is lifeguarded for an extended season. Widemouth Cafe is situated in the car park along with a toilet block with outside showers and just across the road, the popular Trelawny Tea Room also provides surf hire. 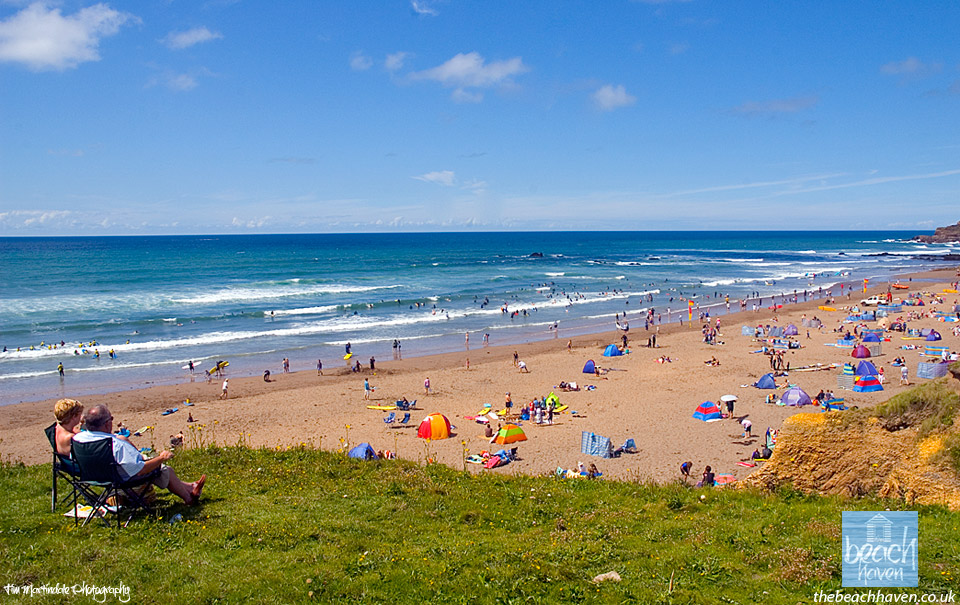 Widemouth main beach. Dogs are banned between May 15th and the end of September. 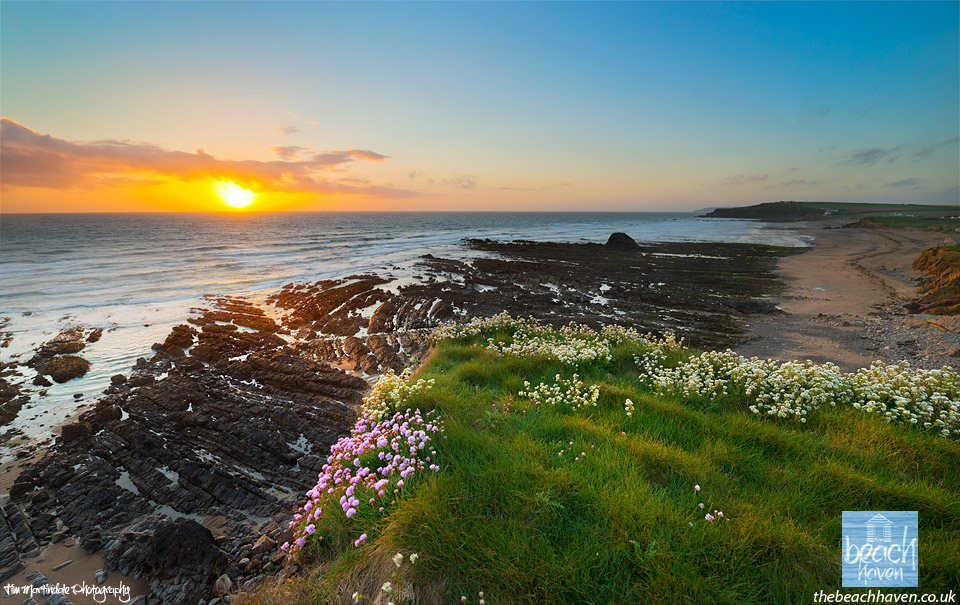 The southern end of Widemouth is known as Black Rock and is dog-friendly all year round. It is a privately owned beach with car park and cafe.

Any cookies that may not be particularly necessary for the website to function and is used specifically to collect user personal data via analytics, ads, other embedded contents are termed as non-necessary cookies. It is mandatory to procure user consent prior to running these cookies on your website.