Spring on the Clifftops

What is our favourite time of year on the cliffs? Undoubtedly, it’s springtime!

From mid-April to mid-June, the cliff-tops become a riot of colour as the wild flowers burst into bloom; the grass is greening up; the evenings are becoming long again; and the sun has redeveloped a welcome warmth heralding the promise of a long, hot summer ahead!

But despite all these wonderful factors, Cornwall is surprisingly peaceful at this time of year with most of the period falling outside of school holidays. 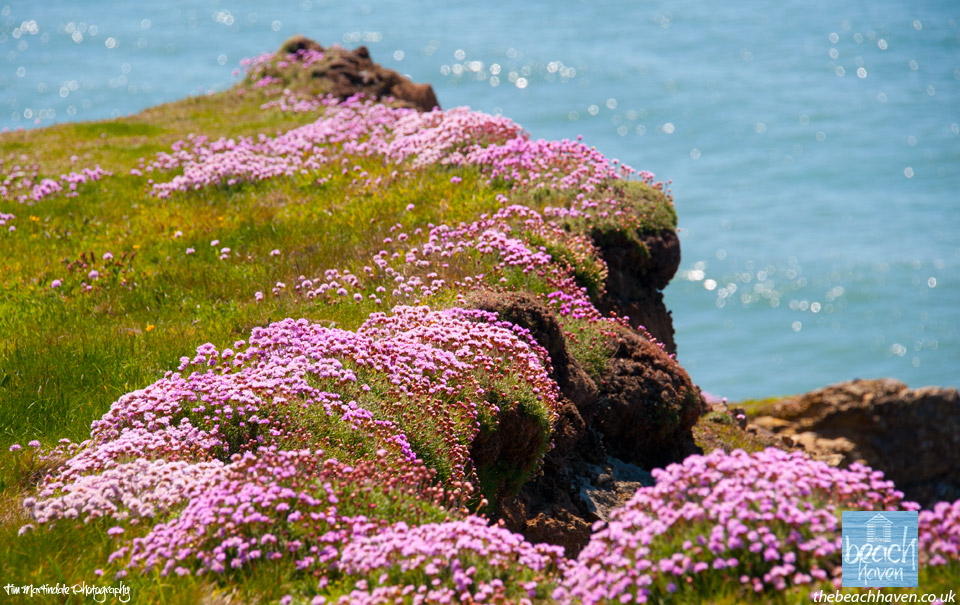 A mass of thrift at Menachurch Point near Northcott Mouth,

The most prolific of the wild flowers is Thrift (also known as ‘sea pinks’). It grows in tufts, often right on the very edge of the cliffs and even on the cliff face itself. Look closely though and there are also a huge variety of other tiny and hardy wild flowers growing amongst them as well as the abundant patches of yellow-flowered gorse with its lovely, coconuty scent. You will also hear the delightful song of the skylarks high above you and the occasional croak from the pair of ravens that nest here. Ravens are beautiful, imposing and intelligent birds that mate for life. You may be lucky enough to see them turn on their back in mid-flight and plummet, just as if they have been shot, before righting themselves and flying on. Apparently they do this just for fun! 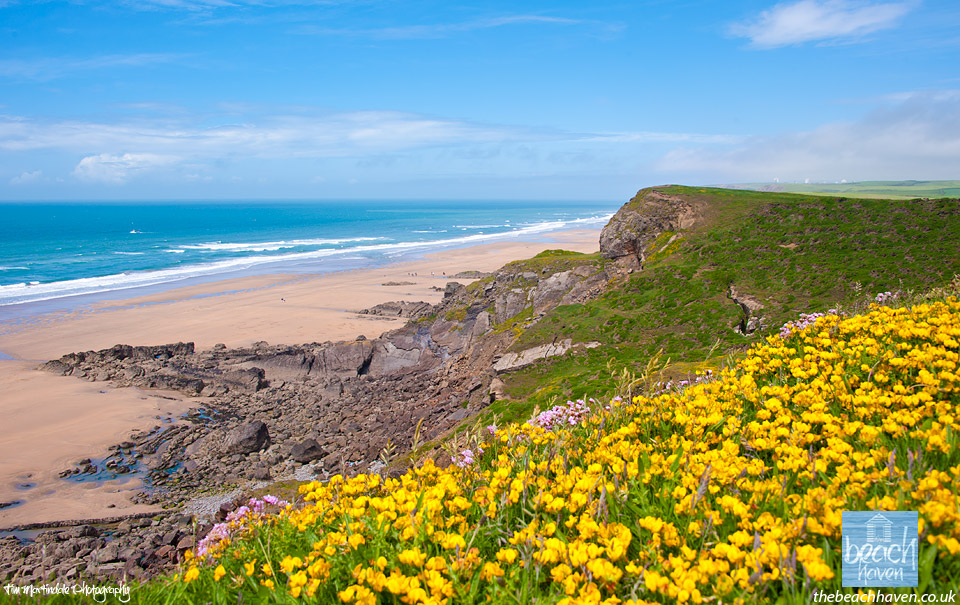 We have two fantastic walks on our doorstep from The Beach Haven. You could choose a gentle three mile walk and head north up the coast onto the cliffs at Maer Downs, past a spot known locally as ‘Earthquake’, where gradually subsiding rocks have created great clefts in the earth, to Northcott Mouth. If the tide is out, you can return along the beach back to Crooklets. If you fancy carrying on, there are fabulous views to be had, both up and down the coast, at Menachurch Point. Beyond that there is Sandymouth Bay and Duckpool making a five or seven mile round walk respectively. On a spring low tide you can walk all the way back from Duckpool along the beach.

If you venture south you will walk past Summerleaze beach towards Bude, over the river and past the canal’s sea lock up to Efford Down and Compass Point where there are superb views back over Bude Bay and up the coast towards Devon. If you carry on along the coast path to Upton, you can head inland to Rodd’s Bridge and return along the canal tow-path. Keep your eyes peeled for the otters, kingfishers, herons and in the spring time, the variety of ducklings, signets and other delightful chicks! This loop is an easy five mile walk but if you want to extend it to eight miles, and perhaps pause for a pint or some lunch at the Bay View Inn (highly recommended!), you can carry on to Widemouth before heading over the fields and joining the canal at Helebridge. 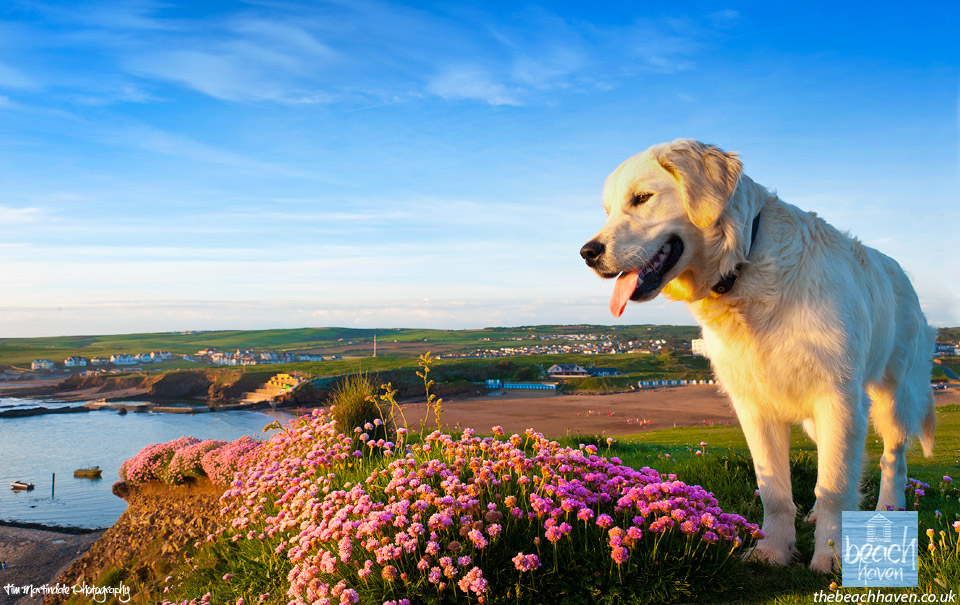 Admiring the views on Efford Down, Bude. 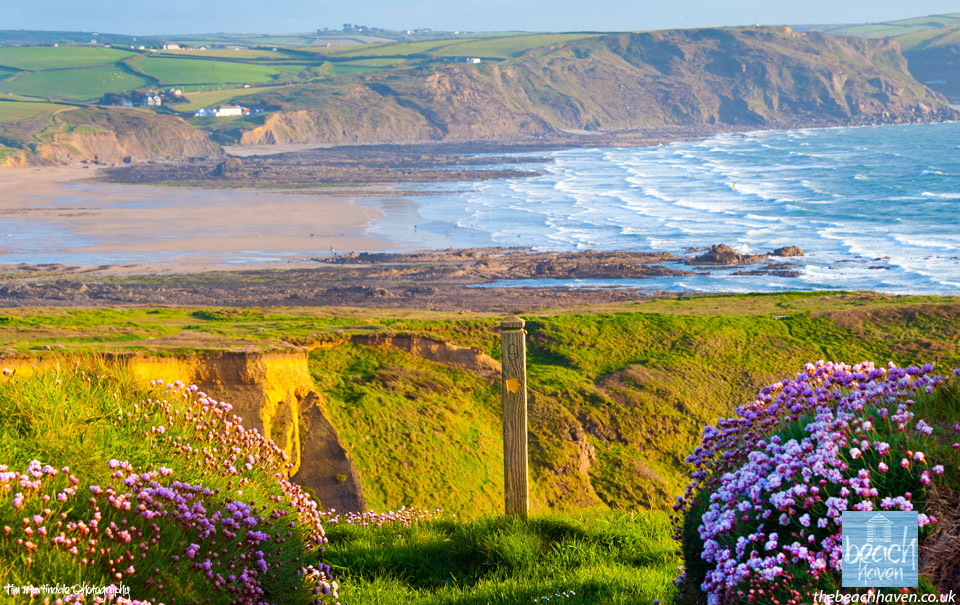 The coastal footpath to Widemouth Bay, a three mile walk from The Beach Haven

Click on the any of the images below for a slideshow of just some of the varieties of wildlife and views that the walks offer!

Close up of thrift in bud and bloom.

Kidney Vetch on the cliffs at Maer Down

Kidney Vetch and Thrift on the cliffs at Maer Down

Noisy fulmars nesting on the cliffs at Maer Down

Thrift (Sea Pinks) miraculously growing out of the rock!

Sea Campion clinging to the cliffs with the Atlantic surf below

The coastal footpath to Widemouth Bay, a three mile walk from The Beach Haven

Clumps of thrift with the coastline to Crackington Haven beyond.

Thrift clinging to the very edge of the cliffs on Efford Down.

Admiring the views on Efford Down, Bude.

Looking up the coast to Sandymouth and Duckpool from Menachurch Point.

The coast path south of Bude at Upton.

A mass of thrift at Menachurch Point near Northcott Mouth,