We had an uplifting day yesterday. To be honest, living here in Cornwall, most days are good for Finlay but yesterday was a very good day!

We took a short trip over the border into Devon to meet up with some amazing golden retrievers; Marley, and his buddies Poppy and Harry. Marley and Poppy have both recently been rescued from Turkey. Marley was badly beaten and shot in the head by a previous owner. He was left for dead in a pound with two badly broken legs and blind in one eye. Poppy had been run over by a car and had a leg amputated. Both were rescued by the charity ‘Happy Paws‘ and subsequently brought over to the UK. Following their lengthy but successful rehabilitation, they now have a forever-family who happen to live near to us. We just had to go and meet them!

Here is Finlay, patiently waiting for his new friends to arrive at Instow beach. 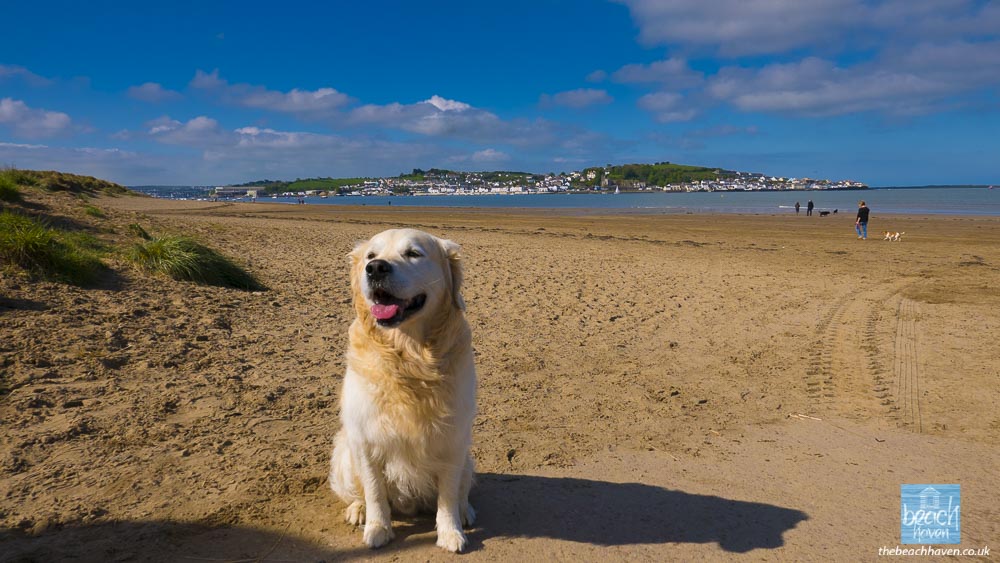 Before we introduce you to Marley as he is now, here he is in the early days after his operation in Turkey. 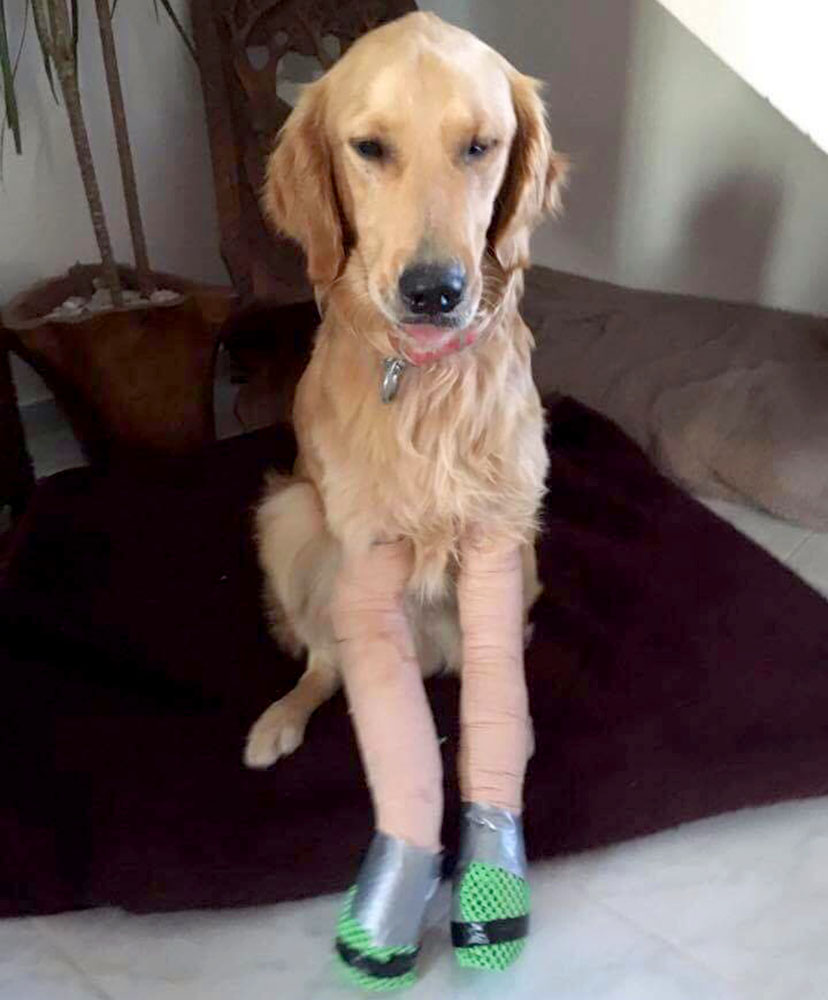 We met at Instow, a charming little estuary town near Bideford  about 25 miles away. As Goldens always seem to do, they immediately recognised each other as ‘family’ and proceeded to enjoy a wonderful hour or so charging up and down the beach and retrieving sticks from the sea. It was so heart-warming to see just how well the two rescue dogs have adapted. Despite the hideous acts of betrayal and cruelty Marley had suffered, he showed no signs of being nervous and was obviously delighted to be part of his new Devon family. Finlay though was more taken with Poppy, the three-legged Goldy and he proudly showed off his swimming finesse and spent a good deal of time licking Poppy in his own affectionate way.

This is Marley, leading the others out of the sea. Doesn’t he look great? (And no, I don’t know why Finlay is shaking whilst still in the water!!) 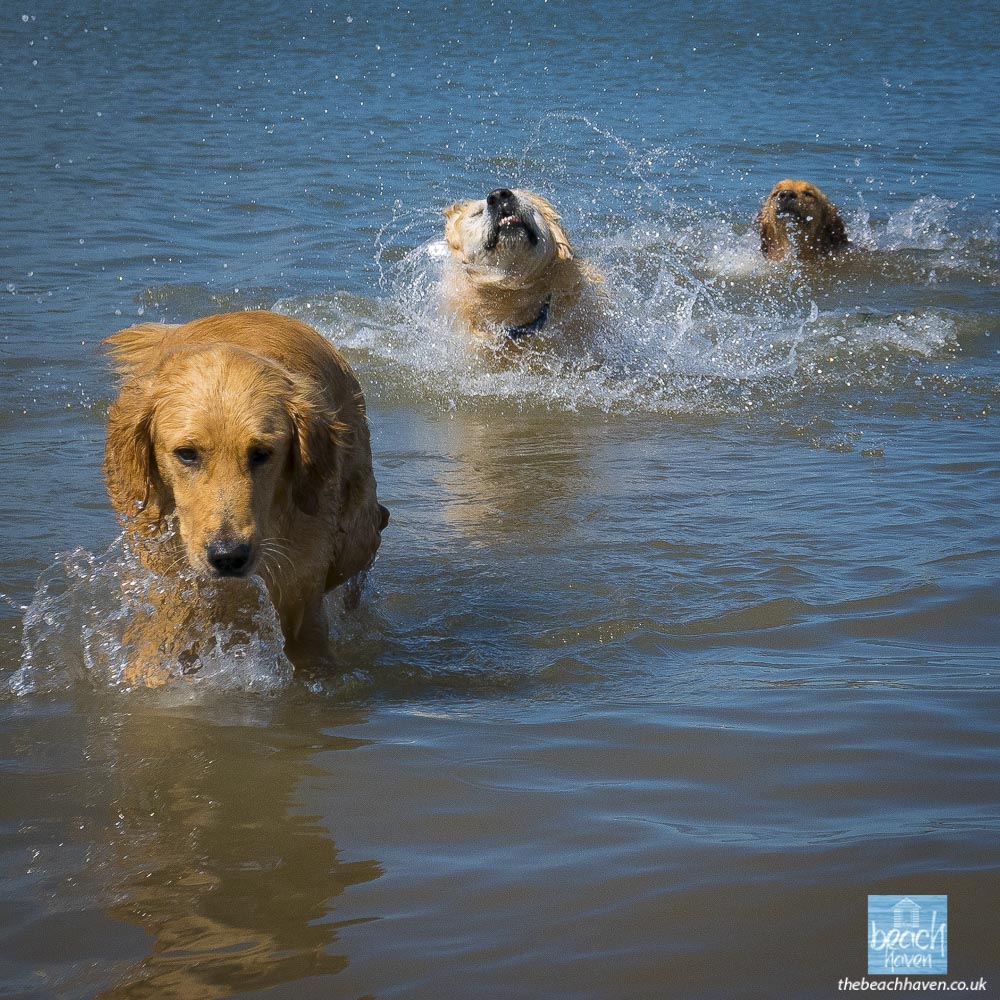 Marley leading the way out of the sea with Finlay, rather pointlessly, shaking before he gets out! 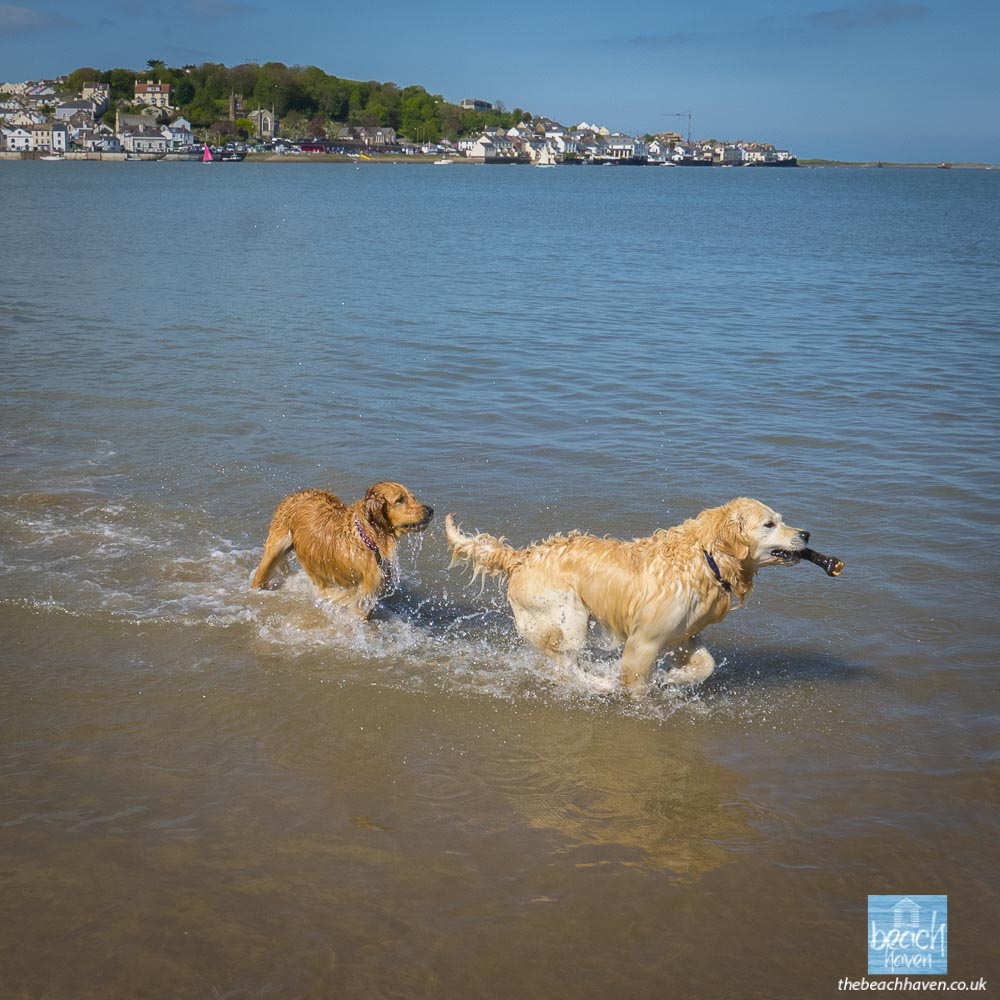 Only having 3 legs is no handicap for Poppy who was determined to get Finlay’s stick! 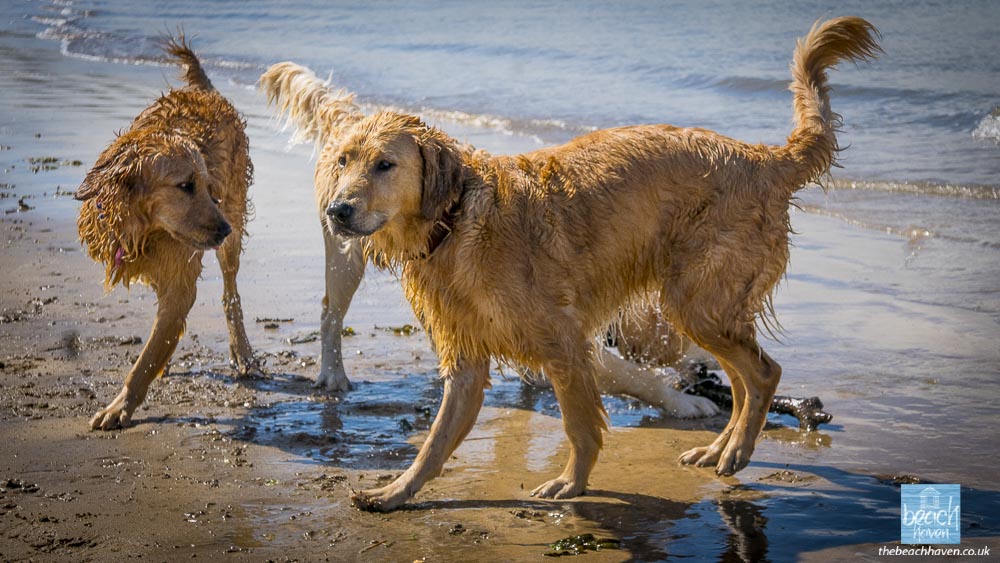 The rescues: 3-legged Poppy on the left and Marely, who was badly beaten with two broken legs. 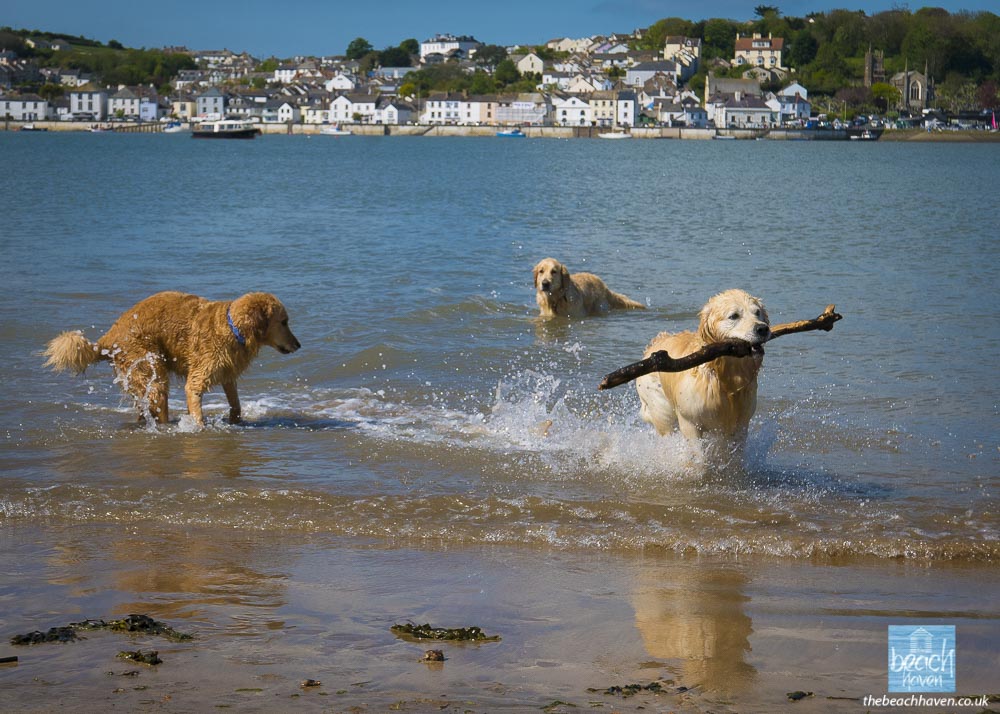 Finlay after another successful retrieve 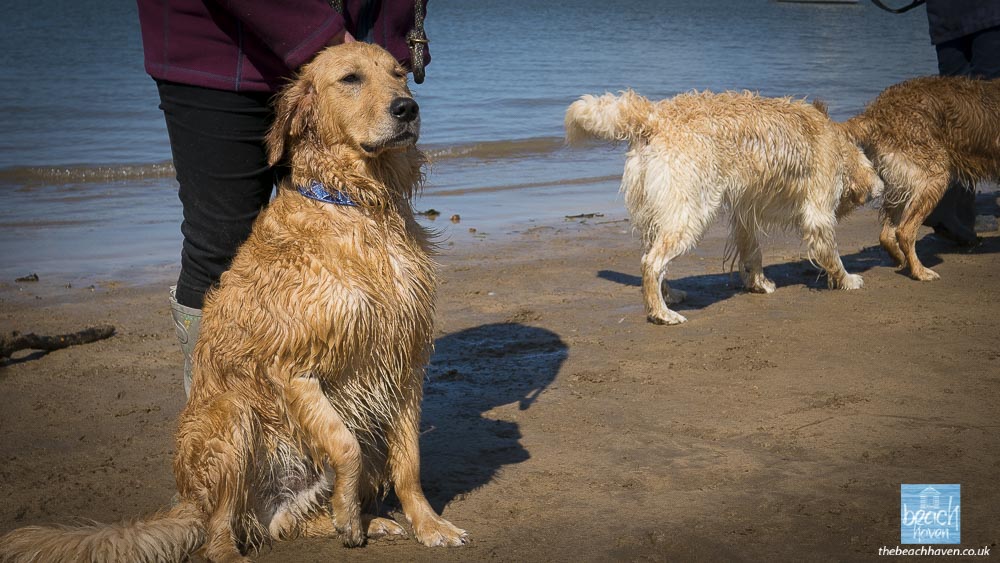 Marley posing and Finlay showing his ‘affection’ for Poppy!

Here is Marley posing while Finlay is showing his ‘affection’ for Poppy!

After that amazingly uplifting experience we decided to make a day of it and stopped off at Clovelly on the way home. Clovelly really is a must-see when staying at The Beach Haven. It’s only about fifteen miles away and is one of the country’s most picturesque fishing villages. No cars can get to its harbour which is accessed down a steep cobbled street. Sleds are used for the residents to carry their groceries etc to their cottages! While we were there filming was taking place for a film, ‘The Guernsey Literary and Potato Peel Pie Society’ (a snappy, memorable title – not!) and the harbour had been time-warped back to 1946 along with a multitude of extras and children dressed as evacuees. We spotted Jessica Brown Findlay (Lady Sybil in Downton Abbey) being kept out of the sun by attentive aids with big brolleys. (Can’t have actresses with sunburnt faces!!)  Our Finlay then enjoyed another hour or so on the quiet boulder strewn beach while his owners, may-or-may-not have, had a sneaky 40-winks in the warm sunshine! On our way back to the car Finlay enjoyed his second ice-cream of the day!!! 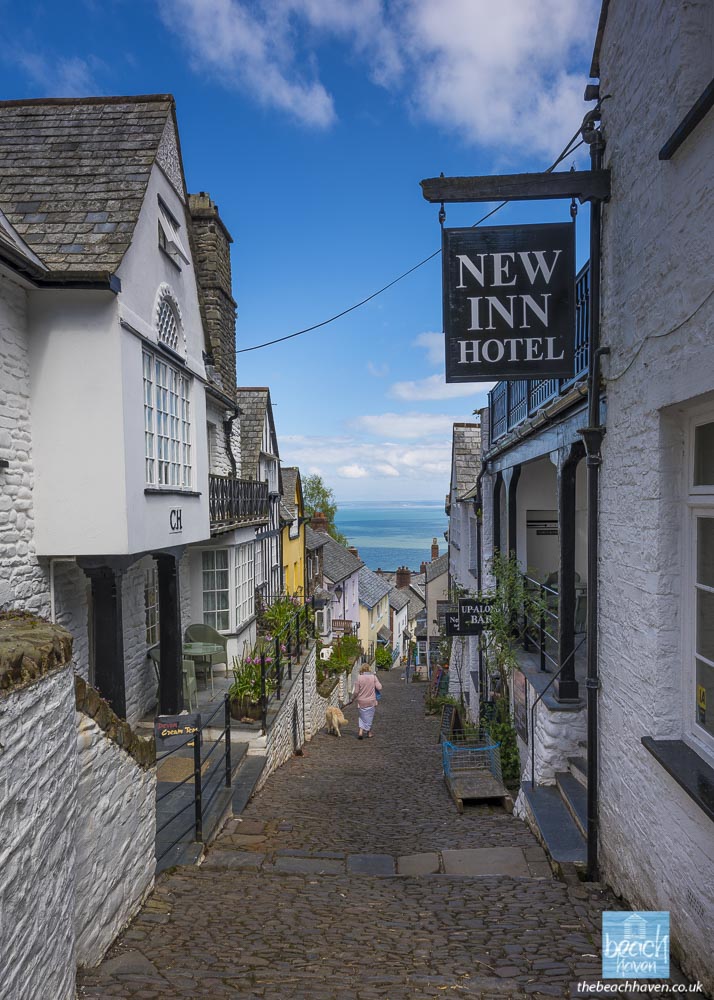 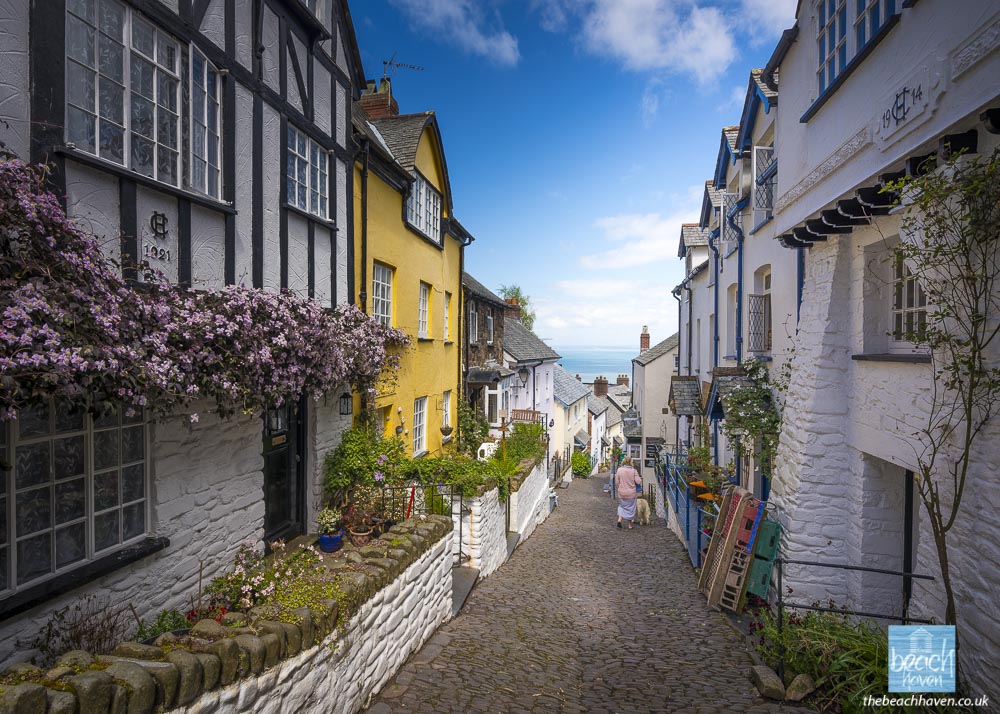 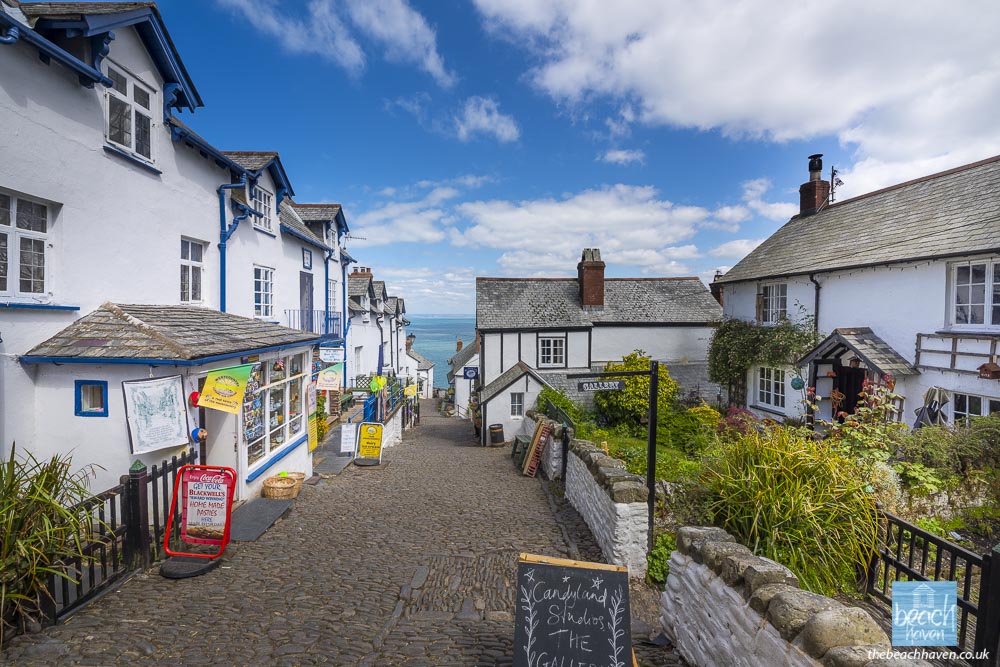 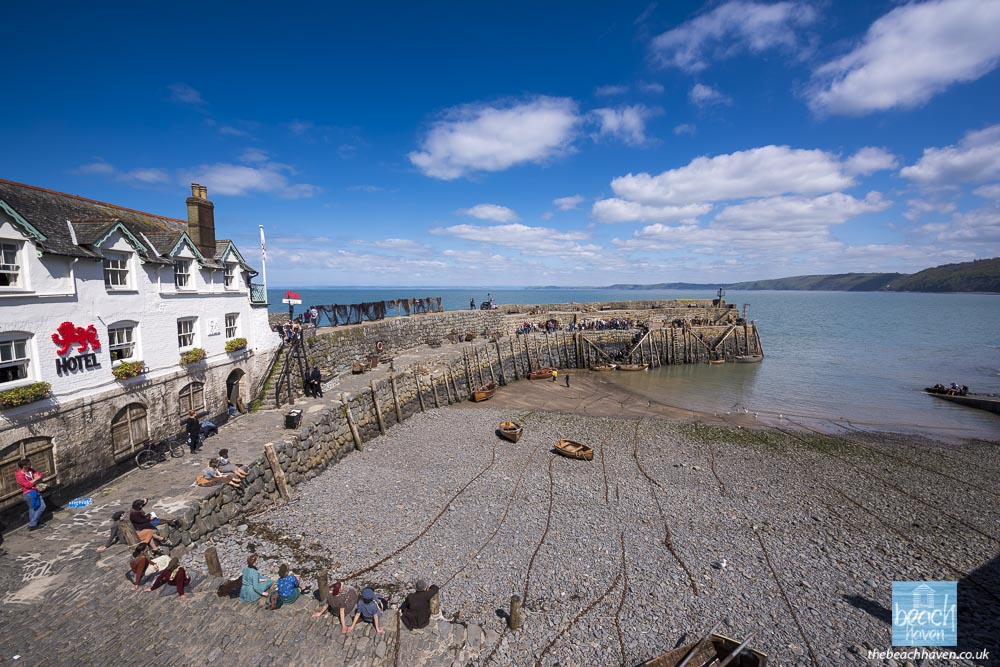 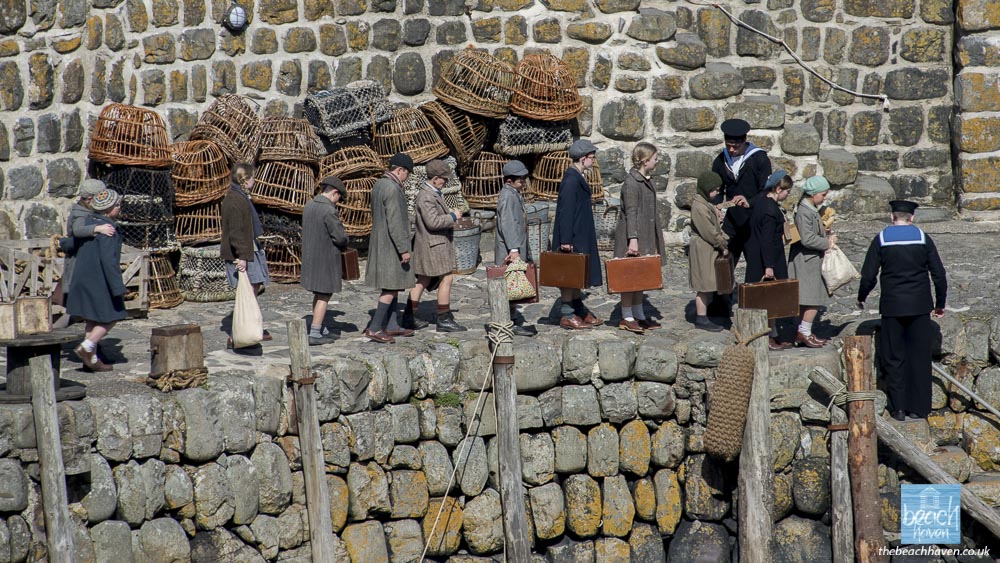 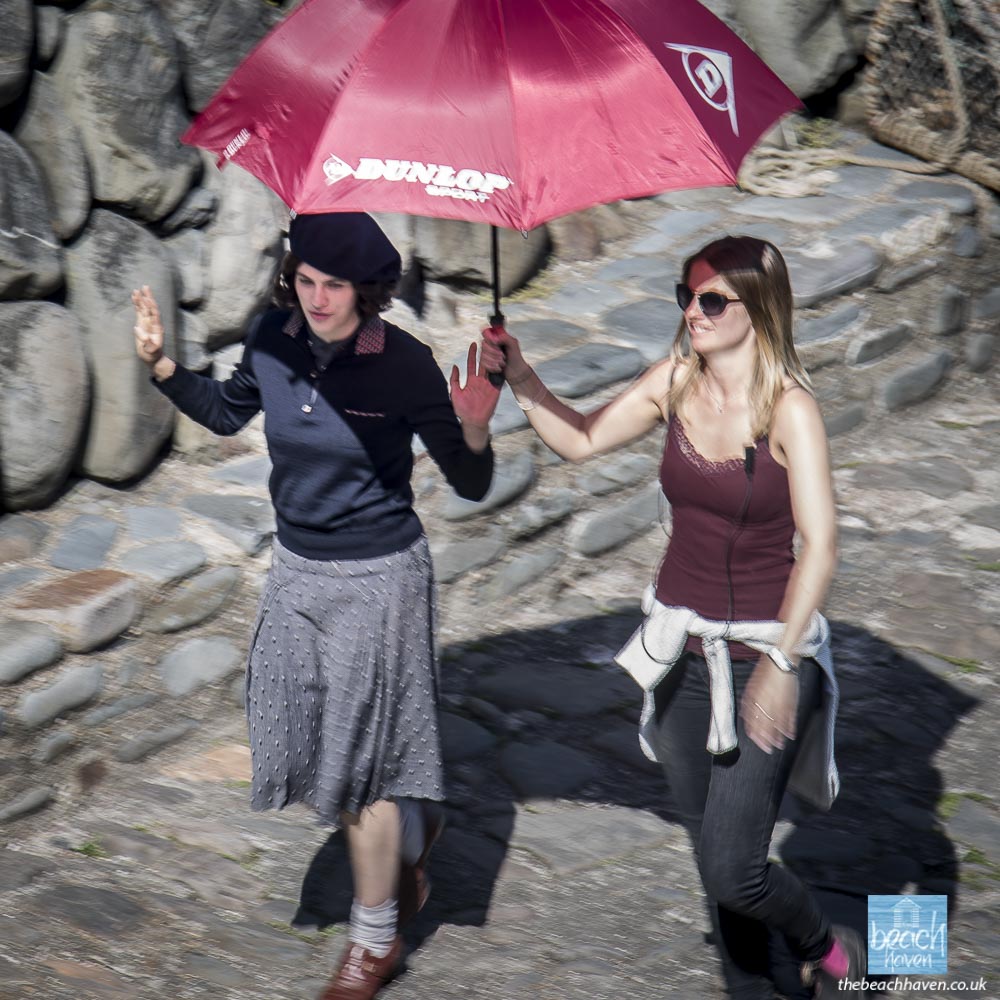 When we finally arrived back home it was still such a gorgeous evening so Finlay and I continued our outdoorsy day and went for a walk around the downs, beach and breakwater – a chance for his third swim on his third beach of the day! As always, he was more than happy to pose for a few photos in the process. 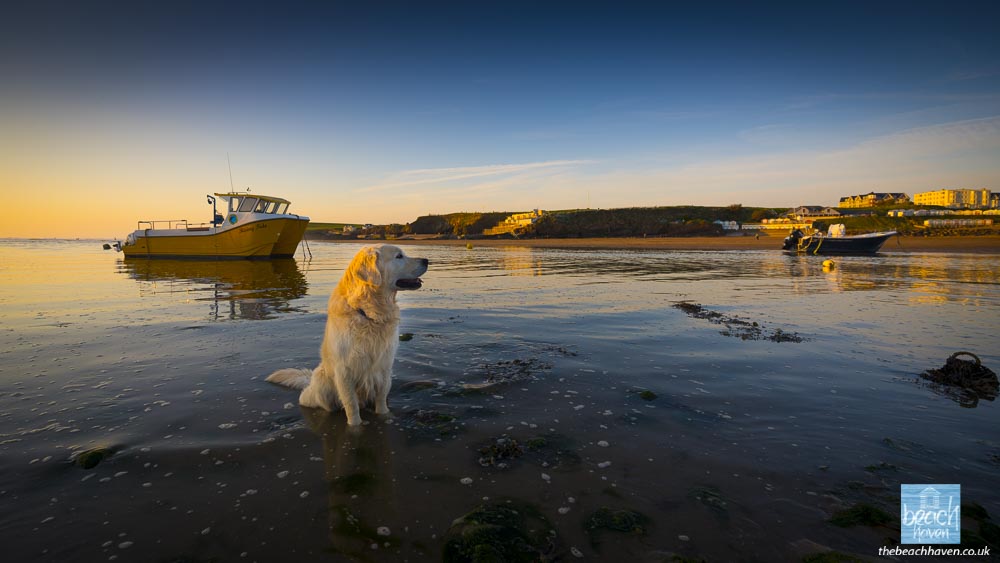 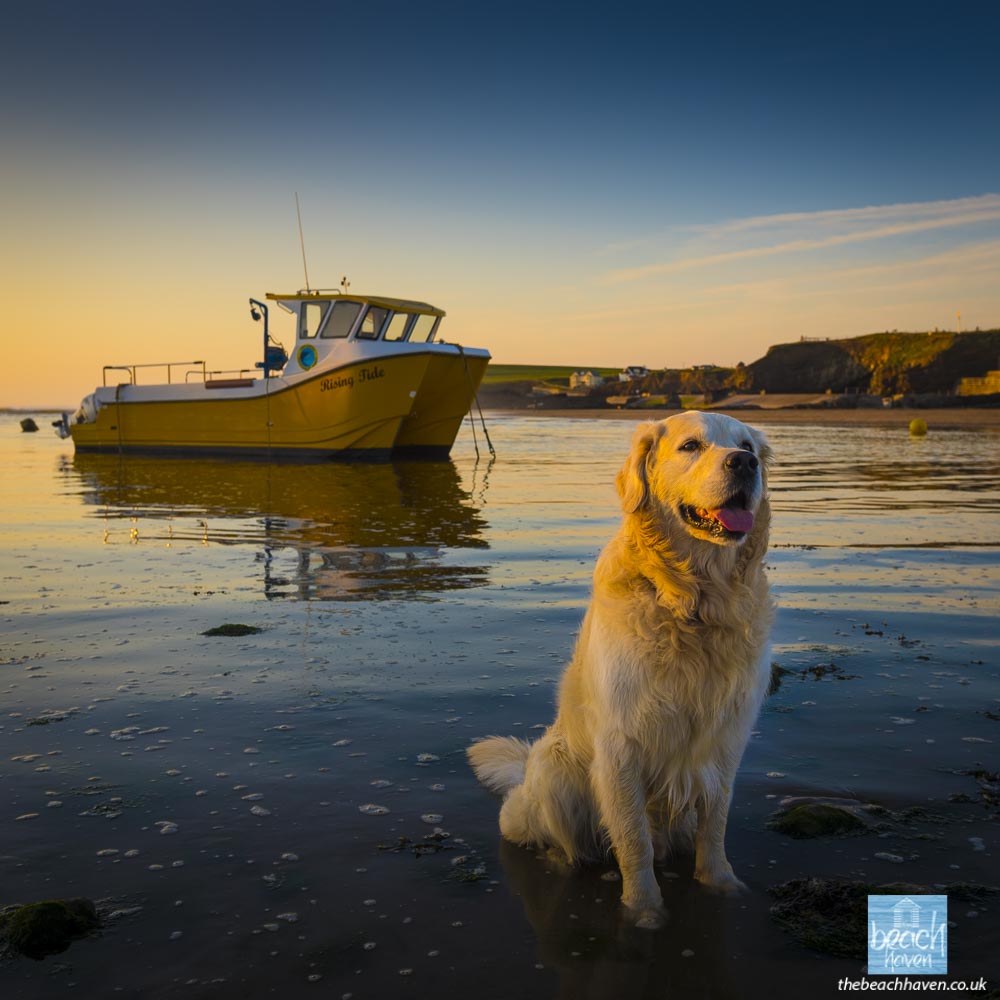 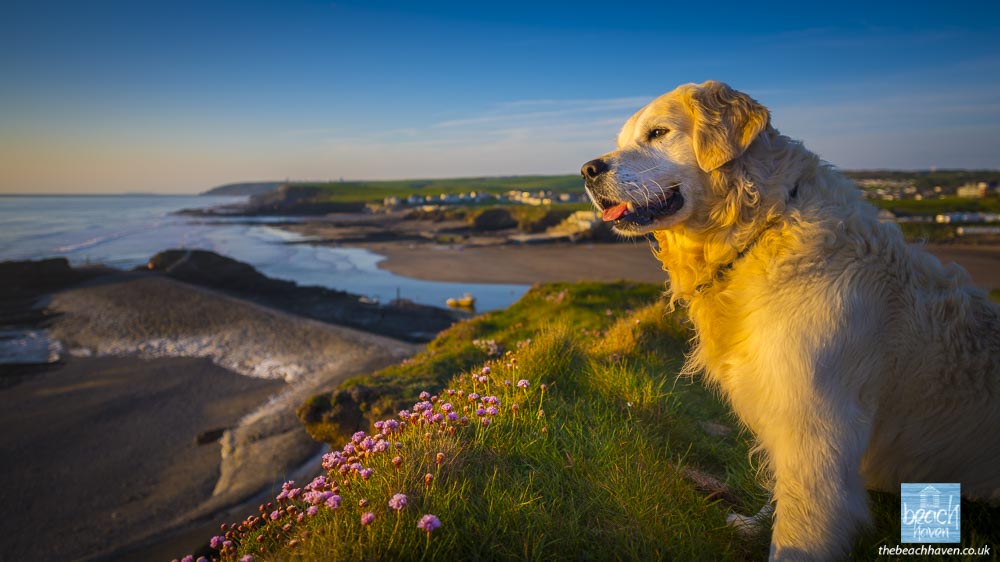 If you would like to give your dog a wonderful beach holiday – we love to welcome dogs to The Beach Haven. Check our availability here.